IS LACTIC ACID BACTERIA THERAPY THE MOST EFFECTIVE TREATMENT FOR LACTOSE INTOLERANCE?

According to Nobel Prize winner Metchnikoff, this Russian scientist clearly proposed that a huge number of lactic acid bacteria in yoghurt plays an important role in prolonging life. Similarly, Li (2012) found that a kind of lactic acid bacterium MG1363/FGZW alleviates lactose intolerance. This piece of information was noted in a journal named Applied Microbiology and Biotechnology. It has been cited thousands of times and also lines up with other sources of clinical data, therefore the source is relatively valuable. For supplement lactase preparation, at the end of the 19th century, Dutch biologist Beijerincek first discovered and reported that lactase could hydrolyze lactose. With the improvement of the quality of lactase, commercial lactase preparations have been popularized in the markets. In addition, Liu H (2015) reported that taking lactase (β-galactosidase) can effectively treat lactose intolerance which was indicated by reducing the amount of hydrogen in the breath.

Some biologists hold the view that lactic acid bacteria not only fully express the characters of the probiotics, but also continuously secrete β -galactosidase and release it into the gastrointestinal tract. Kolars et al. (1984) divided 50 patients with lactose intolerance into four groups. They were given lactose aqueous solution (containing 20 g lactose), milk (containing 18 g lactose), yoghurt (containing 18 g lactose), and galactoside fructose aqueous solution (containing 10g galactoside fructose) respectively. The results showed that the hydrogen content in the breath of patients in the yoghurt group was one-third of that in the milk and lactose solution group. The proportion of patients with diarrhoea or flatulence in the yoghurt group was only 20%, while that in the milk group was 80%.

<1>.EMPIRICAL CONCLUSION METHOD
Utilised in the past, the methods of using lactic acid bacteria and supplement lactase preparation will be briefly summarized.

<2>.INVESTIGATION METHOD
Considering the time people start to experience discomfort after drinking milk/yoghurt, this study principally conducted qualitative research by making a questionnaire. Furthermore, the other aim is to collect people’s attitudes in different age groups towards this therapeutic method through yoghurt---the most common form of lactic acid bacteria.

Paired Samples T-test(N=196) is an excellent inferential statistical method that I used to compare the means of two sets that are directly related to each other. These data came from the same group of people who filled the questionnaire, but the condition changes before and after experimental processing.

Instead of letting patients take milk for my experiment to get data, I just asked the interviewees to recall and record their experiences of lactose intolerance before. In addition, the result will be presented anonymously since this research involved the medical history of the disease.

<1>.DIGESTION OF LACTOSE AND THE FUNCTION OF IECS

How is lactose degraded in the human body?

Lactose is the only disaccharide in milk by the existence of the monomer-form molecule, and it is mainly digested in intestinum jejunum. Lactose is hydrolyzed into glucose and galactose which connect through a 1, 4-glycosidic bond by lactase secreted by intestinalepithelialcells, IECS, then absorbed by active cellular transport. Furthermore, glucose mainly provides energy for the body, while galactose binds to ceramide by a glycosidic bond. Galactocerebroside begins to take shape, which participates in the development of the brain. Compared with other disaccharidases, lactase ripens the latest, has the lowest content, is the most vulnerable, and is hardest to repair. After lactose intake, problems in any link of lactose digestion can lead to an abnormal increase of lactose concentration. At the same time, the undigested lactose enters the colon, and the intestinal flora will decompose the lactose into lactic acid. Some of the released hydrogen gas is disseminated into the blood circulation and expelled by the lungs through breathing exercises, which is the clinical basis of the lactose hydrogen exhalation test.

<1>.THE SUPERIORITY AND SHORTCOMING OF THE TWO METHODS

However, noticed the inaccurate report of symptoms in some responses, I cancelled the data since it goes against my framework principle of data collection.

Why do lactose intolerant people behave differently? This is because people carry different types of genes that regulate different metabolic expressions.

Due to different lactase activities, there are three genotypes in the human population：

Homozygous lactase non-persistent (LNP)
LNP is the most common phenotype in the population, accounting for about 65% to 70%.

The genetic characteristics of LP are caused by the variation of alleles in the upstream enhancer region of LCT, and a variety of different functional alleles have been gradually discovered which showing significant diversity in different populations. The LP phenotype is only common in people with long-term use of milk and dairy products and is the result of strong targeted selection.

It has been confirmed that lactase activity is high in full-term neonates, then mRNA expression fluctuates due to gene polymorphism, resulting in Heterozygotes(LP+LNP).

Surprisingly, by analysing data in the questionnaire, I found out that women are more likely to talk about their illness history. Moreover, the treatment is well-accepted by the public due to its low drug dependence, convenience, and cheap price which are consistent with nowadays study, meaning this kind of bacteria can be used to treat lactose intolerance effectively in clinical situations. 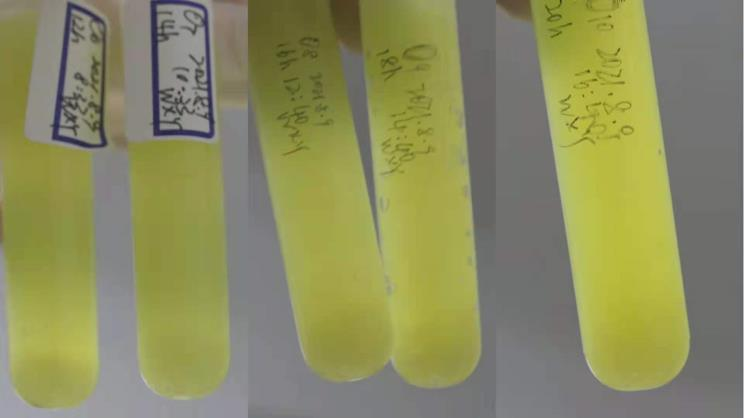